The Brazil Capital - What Have Been The Different Locations? 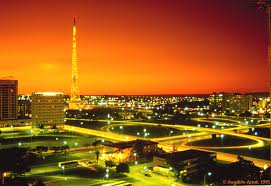 The Brazil capital today is Brasilia, but that has not always been the case. Up until 1960 the capital of Brazil was Rio de Janerio beginning in 1763, and prior to that it was Salvador from 1549 to 1763.

This new capital city had been in a state of limbo for a hundred years after a bill was presented to the Brazilian assembly suggesting that a new capital be constructed that was more secure, away from the sea where it was susceptible to invasion by marauding navies. The bill was passed and remained in the constitution but it was not implemented until Juscelino Kubitschek became President of Brazil and coined the slogan, "50 years in 5."

The Issue - It was the tenacity of this new President that changed the location of the capital city forever. However, this change was no easy feat since the chosen location was a great distance from the rest of civilized Brazil. The site was 360 miles away from any paved roadway, 75 miles away from a railroad, and 115 miles away from any airport, but it was large enough to accommodate a large city with everything needed to sustain life.

The Promise - During Kubitschek's inauguration, he swore to uphold the Brazilian constitution and quickly obtained the authorization of Congress and the building of Brasilia started in 1956 with the construction of a temporary residence for the President.

Competition - Competitions took place for the privilege of designing the capital, and holding true to the theory that modernism should be used in the construction, the plot for the city was laid out in the form of a bird in flight. The body was to be where administrative and government buildings would be, and shopping centers and residential areas were to be placed in what would be the wings.

Construction - The work that took place to construct this new Brazilian capital resulted in linking the entire country of Brazil in such a way that had never been the case before. New highways had to be constructed which provided the means for traveling from one city to the next. Unlike Rio de Janerio and Salvador, which both sit on the coastline of Brazil, Brasilia is farther inland and centrally located making it more accessible to citizens who wish to travel there.

Climate - The Brazil capital today has a tropical savanna climate, or subtropical highland climate which results in an eternal spring. Seasons are recognizable from each other according to the degree of humidity in the air. One season will be dry and another high in humidity. The average temperature is 68 degrees F with September being the warmest with an average of 82 degrees F.

Plenty To Do - UNESCO has designated this Brazil capital city as a World Heritage Site, and there are plenty of things to see and do in this most magnificent city, but plan ahead so that you will be able to enjoy your favorite season.