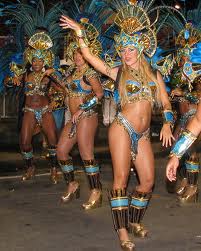 Brazilian Carnaval Costumes Are A Labor of Love

Just like regular clothes, there used to be more to the costumes. In the late 1800's and early 1900's Carnival costumes were generally made up of masks and the most elegant clothes a person had. Brazil, particularly Rio de Janerio, has always been considered a very liberal place, and as society got more liberal the costumes got skimpier. Another reason for skimpier costumes is because the hottest part of year is February and March, when Carnival tends to happen. Marching and doing the samba for an hour or more can get incredibly hot. Plus the skimpier costumes give more freedom to move, allowing the incredible samba moves to shine through.

Not all Brazilian Carnival Costumes Are Skimpy

Depending on the area, the parade and the party there are family friendly costumes. Carnival isn't just one parade or one party. Neighborhoods have their own parties, with their own parades. Many of the small neighbor parties have costumes that are family friendly and less elaborate than the ones from the big samba schools and parades. Tourists can join in, by renting a costume or coming up with their own.

Every year each samba school comes up with a theme. They have covered everything from astronauts to zoo animals. Within their theme, each group goes all out to illustrate it. For example, for astronauts, there might be costumes showing the sun and moon and stars. Some of the groups find a theme that works for them and stays with it. There is a group where all the men dress in drag. There is another where everyone dresses as nuns. They have their own daily parades during Carnival starting at a convent and marching around the city.

From the costume designers to the people who inspect the costumes there are hundreds of people who work on the costumes. Many of the samba schools, especially the ones in prosperous areas have designers on staff and provide their own atelier. They also have an overall producer that coordinates the costumes and parade floats to make sure that school's Brazil Carnival Costumes fit in the theme and stick with a plot.