The Brazilian Carioca - 5 Things That Make Them Different 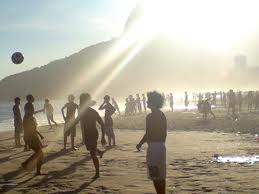 Carioca is what you call people from Rio de Janerio. If you ask linguists about the word means, they will probably tell you that it is a Tupi Indian word meaning “houses of whites” or “white house.” This is the way they describes the houses that were built by Portuguese who settled in the country of Portugal. In time, this term was adopted by the Portuguese, and is what most of the locals call themselves.

However, you do not have to be native to this region of the world in order to be a Carioca. All it takes to become one of them is to adopt the relaxed way of life that is inherent in the city of Rio. First you have to understand some of the basics if you are to become friendly with locals.

More important than anything else, when it comes to fitting right in with others, is the understanding of the concept that time is flexible. When you are arranging a business meeting, don’t be surprised when locals arrive a half hour late feeling that they are right on time. Failure to understand this may mean you will find yourself on the edge of having a breakdown during your stay in this amazing city.

Some visitors have a hard time figuring out another trait that is peculiar to someone from Rio. They are very friendly, and they are very likely to strike up a conversation with strangers. However, when they tell you that they will meet you later on, or show up at your home, they may not really intend to do such a thing. It could be that they are just being polite. This is of no concern to others from Rio, even though you may find it frustrating. Just remember to have plan B in place so as to not waste your time.

Even though some might think so, Brazilians are certainly not Hispanic in the truest sense, but they do share some traces of Latin heritage. They often greet each other informally with a kiss on each cheek. This is a common practice between males as well as females. Even some jiu-jitsu athletes kiss one another full on the mouth as a sign of camaraderie, and this has nothing to do with any type of connection with the gay societies. When visiting in Rio, be sure you are not averse to being touched.

While you can be sure that Brazil’s cultural capital, Rio, is home to a cosmopolitan lifestyle, even the most sophisticated people can be found watching popular TV novelas. They derive a great deal of fun from this activity.

You might be aware of the passion for soccer that seems to be inborn in every Brazilian, and many athletes have adapted it for playing on the beaches using a volleyball net. No hands are allowed to touch the ball.

People from Rio have had to learn how to survive by sharing spaces with people from a variety of cultural backgrounds and value systems. It is difficult to differentiate between the millionaires and the shack dweller on the beaches of this city. It doesn’t matter national origin when it comes to becoming a Carioca, all beliefs and ethnic backgrounds in Rio interact with each other.

The roots of Carioca that run deep in European, African and Brazilian cultures often combine in such a way that even though typical natives may be born Catholic, you may also see a Buda positioned for good luck in the same home.