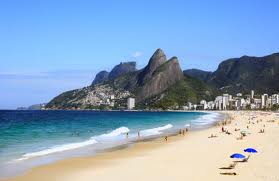 Rio de Janeiro weather is pretty average year round. What I mean by average is not too hot and not too cold. I'm only listing summer and winter because spring and fall are so comfortable its not worth mentioning. I would only take some shorts, short sleeve shirts and maybe a windbreaker for the night. The weather in Rio de Janeiro is just plain awesome!

Now, during the summertime in Rio it can get pretty hot. Imagine, you're right there by beaches and the humidity can be pretty thick. Also, keep in mind that the weather in Rio is opposite of the United States. Their summer time is December-February and part of March. I remember when I was in Rio during March it was very humid still. Sometimes I would come back from class and have to take a shower just because I was sweating when I walked outside.

It can get over 100 degress during their summer months. It also rains a lot from December through April. I remember in March that it seemed like it rained every other day.

Rio de Janeiro weather in winter time is pretty mild. It averages to about 75 degrees. When I was there I refused to buy a jacket while living in Rio. I thought it would be a travesty to buy one when I was there.

However, it did get pretty cool a couple of times after some rain. I did borrow one of my students jackets (only after they persuaded me...they could see my shivering) during this time.

Winter is actually one of the best times to get on the beach with a nice breeze and the sun shining on you and keeping you a nice mid 70 degrees warm.

Keep in mind that they are on Celsius instead of Fahrenheit. All of their temperature gauges will have Celsius. Here's a cool trick to gauging the temperature in Fahrenheit that one of my students showed me. It's not 100% right but close enough for you to know the ball park temperature.

Okay, take the celsius temperature - lets say 25 degrees. Add 14 to it - making it 39 and then double the amount - which will make it 78. The actual Fahrenheit conversion is 75 degrees from 25 degrees Celsius but it is within 3 degrees. I thought it was pretty cool anway. Ta-dah! Feel free to share with your friends :) This will help you determine the temperature in numbers you're used to while you're enjoying the weather in Rio de Janeiro.

I hope you enjoy your time in Rio de Janeiro and pack with some light clothes and shorts. It's very casual, for sure. I loved that part about it. If you're there during the winter months you'll need an umbrella but you'll be able to buy one from guys outside the metro for about R$5-10 which is pretty inexpensive.

Well, best of luck on your travel to Rio and I hope you enjoy the Brazil culture. Ate logo!