Samba Dance Steps - How to Be A Samba Expert 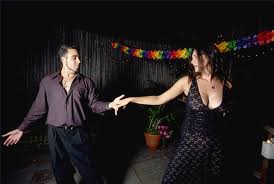 Samba dance steps are invigorating and exciting and something that you will want to join in on when you visit Brazil. Learning the Samba can be a terrific amount of fun and you will love the sound of the music as you dance the steps. Samba dance moves are well known for the hip and knee movements which are performed. There are several different dance moves to learn, but they are all incredible fun.

Samba No Pe- This is the most popular style of Samba and you will often see it being performed in the streets. Samba is enormous in Brazil, and the carnival dancers will all perform different Samba dances for the audiences. Samba No Pe is considered the oldest form of Samba and there are several traditional steps that have to be followed.

Walking Samba- This is one of the most popular Samba dance steps and is quite easy to master. This fantastic bouncy step encourages the dancer to use the ball of their feet. You will need to ensure that you make the dance moves flow and not appear too jerky. The knees also have to coordinate to ensure that the lower body sways perfectly.

Volta step- This samba move is a more technical movement that helps to create the complete dance. You will need to learn to step across with a complete knee bounce in a natural and flowing motion. Alongside this movement, you will need to complete the walking movement and alternate them in opposite directions.

The Samba tempo- This Brazilian samba dance is incredibly fast and once you have mastered the different steps and techniques, you will amaze yourself with your Samba dance moves. The Samba is performed in triple time, which means that you will dance three steps for every two beats of music. The music is always extremely fast and often the tempo will be 100 beats per minute.

On your own or with a crowd- Brazilian samba dance steps are unique as they can be performed as a solo dance, with a partner or in groups. However, the dancers will rarely touch and appear to be performing on their own even when they are together. Often the male dancers will dance around the women in a very sexual way.

Samba the sexy dance- Samba has always been considered sexy and female dancers will typically emphasize their bodies and especially their curves. The movements throughout the Samba are incredibly sexy, and the whole dance routine is electric from start to finish. Brazilian samba can bring people together and light up a whole room.